Are Your Digital Files Safe?

We live in the digital age. No longer do we hoard shoeboxes full of prints to be pulled out and shared with younger generations. Instead, the visual manifestation of our memories — our photographs — clutter up our phones, our hard drives, and our cloud storage. Most will never see the light of day again; they're forever stuck in cyberspace, gathering digital dust.

2020 is the 30th anniversary of the first commercially available DSLR camera — the DCS 100. It may have only had a 1.3-megapixel sensor, and could only store 32 images on it's 1MB of RAM, but it was the start of the digital image revolution.

Since the release of the DCS 100, technology has improved year after year. Today, it's not uncommon to be using a camera with a sensor 40-50 times the size of that first DSLR. We store terabytes of information at a time, and we think nothing of taking a burst of 10 or more images in a single second. Each year, data storage becomes cheaper, and we are consuming it at an astronomical rate.

A piece of history — the DCS 100 featured a customized camera back for the digital image sensor, which was mounted on a Nikon F3 body and released by Kodak.

In the past 30 years, the way we store our data has evolved as much as our cameras. We've gone through hard drives, floppy disks, CDs, USBs, and SSDs. Today, many of us pay to store our thousands of images in the cloud.

In the 1970s, Intel cofounder Gordon E. Moore theorized that technology doubles every two years. It's a rule of thumb that has remained true for the past 40 years and applies to the development of DSLR cameras as well as how we store our digital images.

When we store our images in digital format, we assume that our phones and tablets will always be able to display JPG images. We assume that they will not become outdated and replaced with newer technology. And we assume that the 'cloud' will always be there to safeguard our images. It may seem far fetched, but with the evolution of technology at its current rate, this is a possibility. Today, our iPhones capture live images in HEIC format, instead of JPGs. With this new compression technology, JPG files could soon join tapes and floppy disks in technological exile.

It's almost ironic that we store our files digitally to ensure that they're always available, always accessible, and never get lost. Yet it seems that digital storage causes us more headaches and more lost files than print ever did. We probably still have shoeboxes full of images from when we were children. Yet, so many of us have been through the painful process of losing precious photos. While we've learned to be vigilant about backups — and backups of backups — our clients are not always so careful. 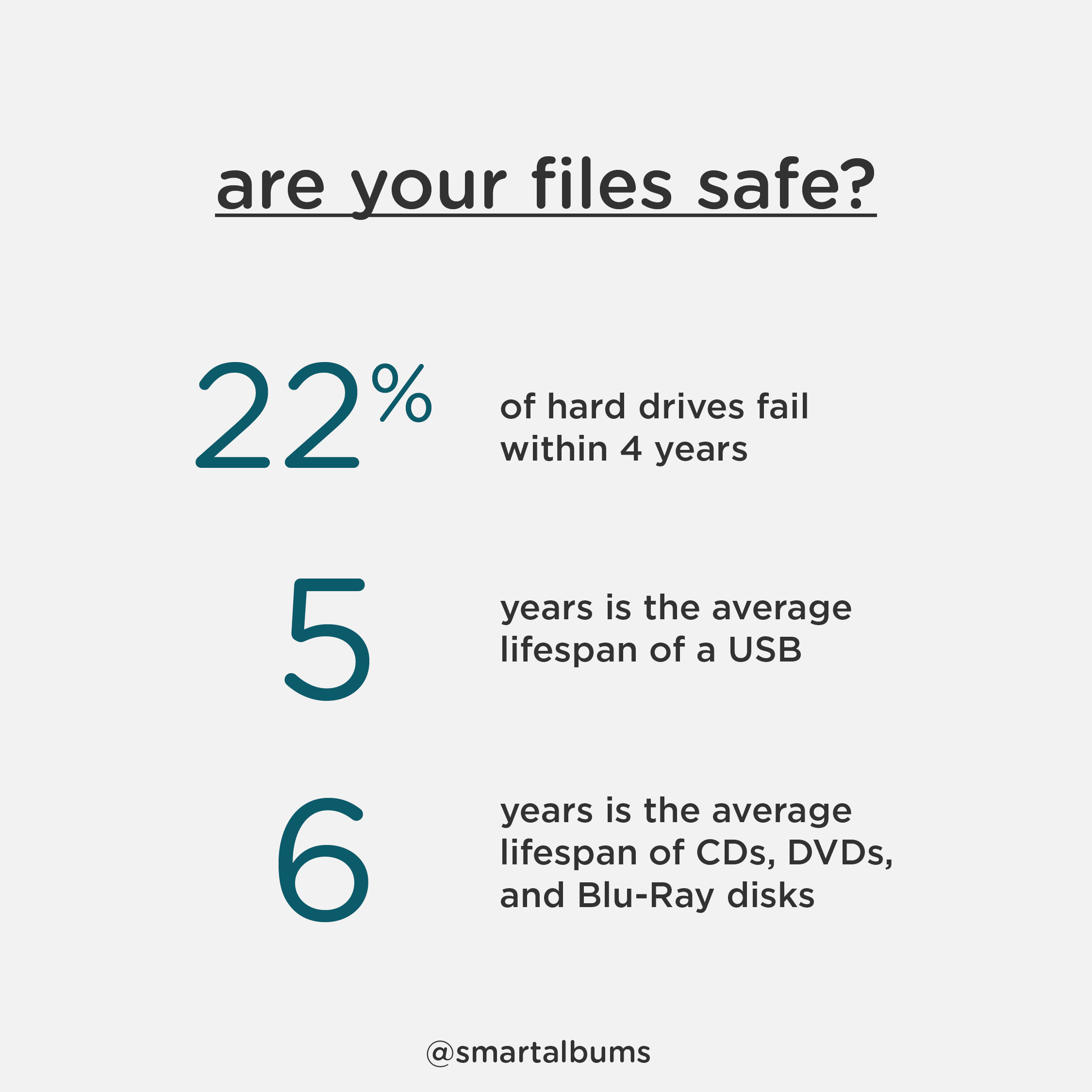 Our clients often store their images in a single place. They could be on a hard drive, their engraved wedding USB, or on the cloud. Sadly, technology does fail, and it does so surprisingly often. In fact, in a 2013 study by Backblaze, an online storage company, it was discovered that 22% of hard drives fail after only four years. These failures could be because of mechanical problems, overuse, or simply because of a random issue.

Many photographers sell photo albums and print products to increase their income from each client. While it may seem like a hard sell at times, imagine how they'd react if you were to explain just how temporary technology is. Imagine if you were to tell your clients that they wouldn't be able to view their images on their 5th wedding anniversary because their hard drive failed. Imagine if they knew that on their 10th wedding anniversary, their beautiful engraved USB would no longer be usable because USBs are obsolete. Imagine if you told them that in 15 years, they'd have to pay a specialist to convert all their images because JPG files are no longer supported.

In comparison to technology, books have remained virtually unchanged for years. The rapid rise of digital books is slowing — yes, they're continuing to grow, but at a slower and slower rate every year. Meanwhile, 86% of all book sale profits in the US last year were from hardcover or paperback editions. And it's Millennials that are popularizing print: 63% of physical book sales are to people under the age of 44. 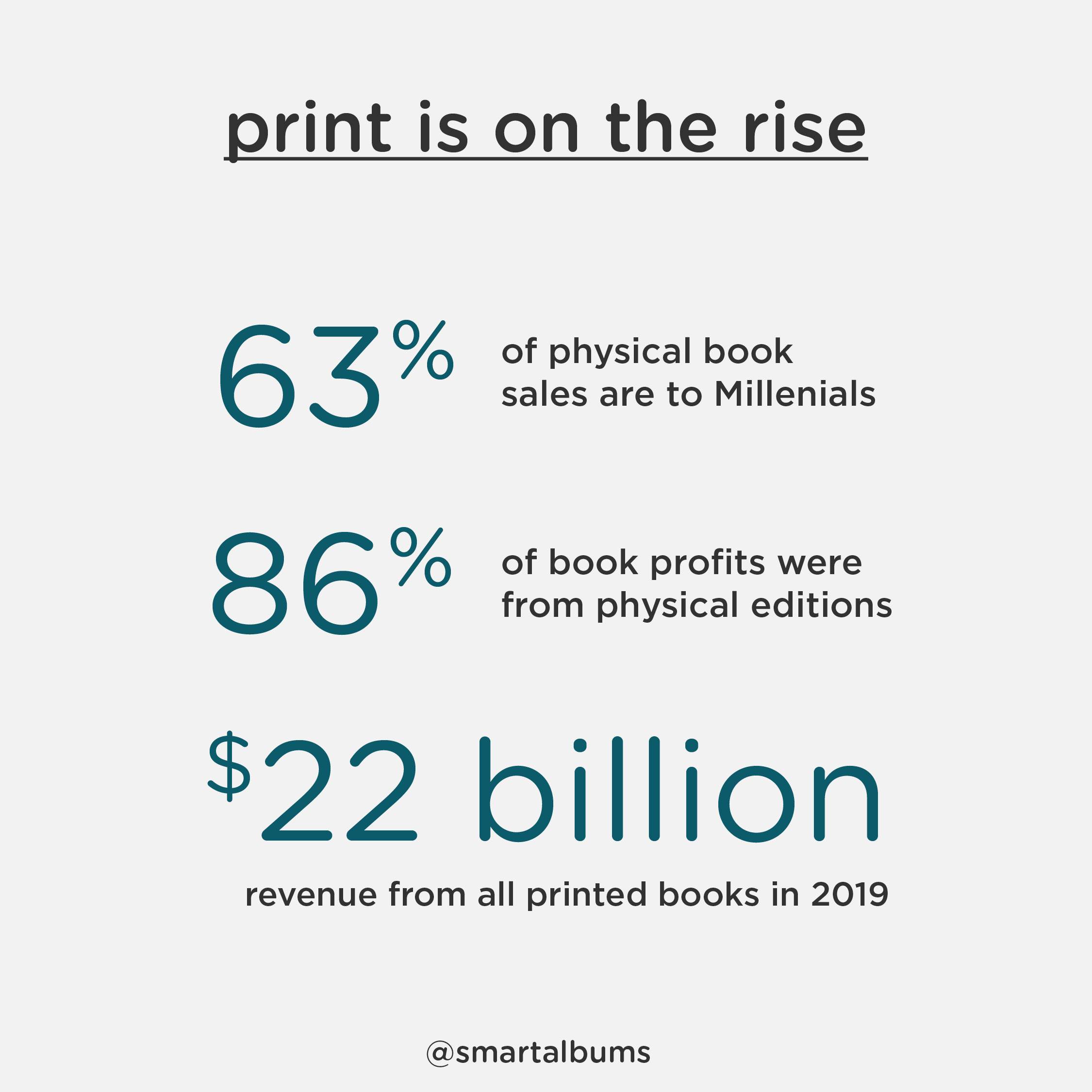 The act of turning a physical page is both tactile and mysteriously personal. It's one of the simplest experiences, yet it is one that digital mediums will never be able to replicate.

In 2009, The New Yorker published a fiction issue, featuring an alien on the cover, surrounded by computer parts. He's reading a book — the only thing that still 'works.' While the image may have been composed as a bit of a joke, or as a comment on society, when technology fails us, it couldn't be closer to the truth.

The New Yorker, June 2009 — front cover of their fiction issue.

For most people, the main reason to print will always be the tactile wonder of flipping through a book of beautiful images. However, printing as a method of preservation sounds like a fantastic reason to surround yourself with beautiful books full of precious memories to be passed down for years to come.

Looking for more ways to encourage print sales for your photography business? Try reading some of our other blogs on album sales like 3 Practical Tips for Selling Albums, 3 Ways to Utilize Suppliers in Album Sales, and Our Guide to Selling Photo Albums Without Being "Pushy" or "Salesy."